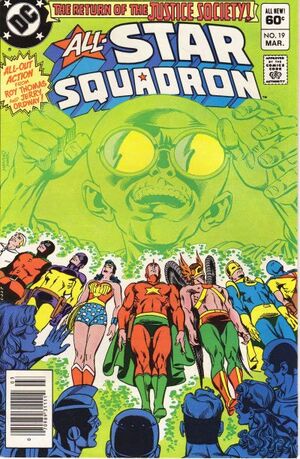 Appearing in "Death, Considered as a State of Mind!"Edit

Synopsis for "Death, Considered as a State of Mind!"Edit

The All-Star Squadron, responding to Brain Wave's challenge, fight their way into the Perisphere on the grounds of the 1939-40 New York World's Fair and find the Justice Society comatose, dreaming of making bloodthirsty war on the Japanese, and being "killed" by the enemy...which may well kill them in the real world.

Retrieved from "https://heykidscomics.fandom.com/wiki/All-Star_Squadron_Vol_1_19?oldid=1409039"
Community content is available under CC-BY-SA unless otherwise noted.