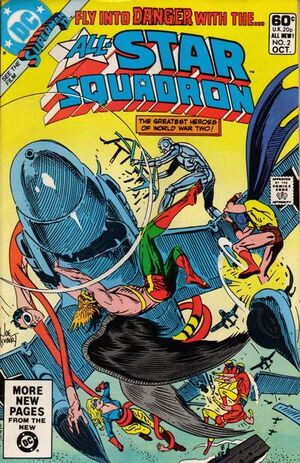 Appearing in "The Tyrant Out of Time!"Edit

Synopsis for "The Tyrant Out of Time!"Edit

Per Degaton reveals to Danette Reilly and the Shining Knight his plan to stalemate the Allies and Axis by having the Allies attack Japan first, rather than Germany. When eight heroes appear near his island, Degaton triggers a volcanic eruption, and pronounces them all dead.

Retrieved from "https://heykidscomics.fandom.com/wiki/All-Star_Squadron_Vol_1_2?oldid=1409020"
Community content is available under CC-BY-SA unless otherwise noted.