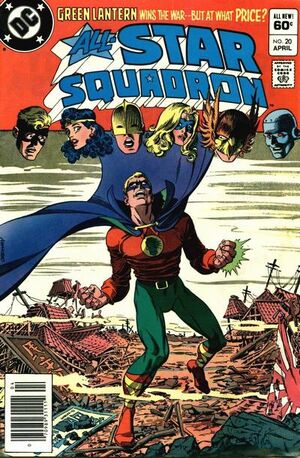 Appearing in "For the Dark Things Cannot Stand the Light"Edit

Synopsis for "For the Dark Things Cannot Stand the Light"Edit

The All-Star Squadron members enter Brain Wave's illusion and battle the illusory Japanese soldiers, but are "killed" one by one, leaving Green Lantern as their only hope against Brain Wave's plot.

Retrieved from "https://heykidscomics.fandom.com/wiki/All-Star_Squadron_Vol_1_20?oldid=1409040"
Community content is available under CC-BY-SA unless otherwise noted.