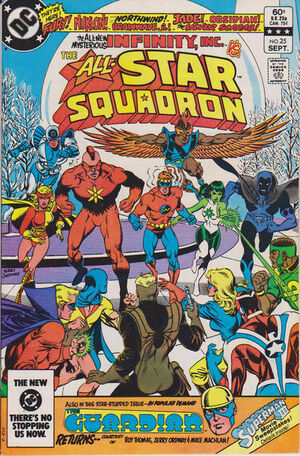 You -- and every instrument of war in this plant -- have a date with the junkheap!

Appearing in "The Infinity Syndrome!"Edit

Synopsis for "The Infinity Syndrome!"Edit

The Justice Society of America are at the War Department in Washington when they learn of the Ultra-Humanite's plan to attack various U.S. defense plants across the country. After a brief meeting with the Secretary of State and Secretary of Defense, the JSA split into teams to handle the various emergencies.

In Brooklyn, the Guardian and the Newsboy Legion spy two super-powered individuals named Nuklon and the Silver Scarab attacking the Brooklyn Navy Yard. Commander Steel and Liberty Belle show up to lend a hand and briefly battle with the mysterious attackers. During the fight, Steel and Liberty Belle suddenly disappear right before Guardian's eyes.

In Los Angeles, a similar situation takes place. Two costumed avengers known as Fury and Northwind attack an airplane base with the intent of destroying all weapons of war. Batman, Robin and Tarantula show up to battle them and are aided by Phantom Lady. Like before, Batman and Tarantula disappear after subduing the attackers.

In Detroit, Green Lantern, Amazing Man and the Atom descend upon a factory that manufactures tanks only to find that it is being attacked by two people known as Jade and Obsidian. Green Lantern is surprised to discover that Jade has powers similar to his own, but does not require a ring in order to produce green hard-light constructs. The Atom meanwhile, tries to apprehend Obsidian, but Obsidian turns into a living shadow and evades capture. The Atom disappears as the fight concludes.

Elsewhere, the man known as Brainwave, Jr. rises from his bed. He hears a radio broadcast detailing the defeat of the All-Star Squadron at the hands of the Ultra-Humanite's machinations. He uses his mental powers to blast a hole in the wall of his room and flies off.

Retrieved from "https://heykidscomics.fandom.com/wiki/All-Star_Squadron_Vol_1_25?oldid=1409045"
Community content is available under CC-BY-SA unless otherwise noted.