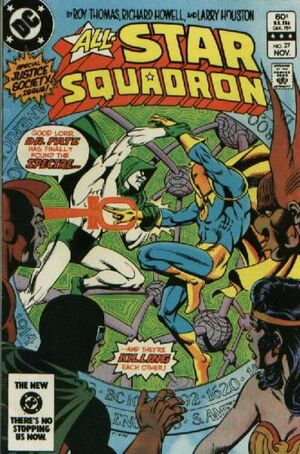 Appearing in "A Spectre Is Haunting the Multiverse!"Edit

Synopsis for "A Spectre Is Haunting the Multiverse!"Edit

After the Atom is briefly hospitalized for his radiation exposure, the Justice Society trace Dr. Fate and learn that he has found the Spectre in another dimension, where he has become the thrall of the evil being known as Kulak.

Retrieved from "https://heykidscomics.fandom.com/wiki/All-Star_Squadron_Vol_1_27?oldid=1409047"
Community content is available under CC-BY-SA unless otherwise noted.