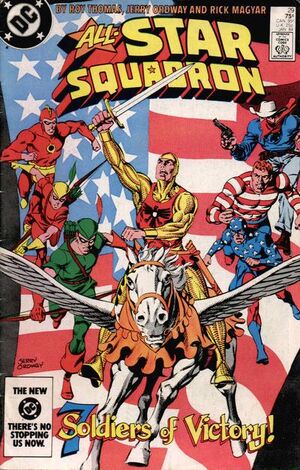 Appearing in "A Man Called Doome!"Edit

Synopsis for "A Man Called Doome!"Edit

The Shining Knight is asked by Winston Churchill to tell the tale of his recent teaming with the Seven Soldiers of Victory and how they battled the machinations of Dr. Doome, a member of the "Time Trust" gone wrong.

The Seven Soldiers flashback in this issue is loosely adapted from the story in Leading Comics #3 and takes place shortly before All-Star Squadron #13.

Retrieved from "https://heykidscomics.fandom.com/wiki/All-Star_Squadron_Vol_1_29?oldid=1409049"
Community content is available under CC-BY-SA unless otherwise noted.