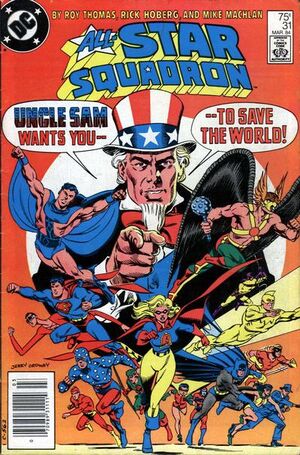 The first meeting of the "full roster" of the All-Star Squadron is crashed by Uncle Sam, who reveals that he has come from an Earth in which the Nazis are even closer to victory than on this one, and the heroes whom he recruited to help him fight the enemy there are all dead. As the All-Stars debate whether or not to accompany Sam, the hero known as Midnight bursts in with a metal box, within which is the unmoving form of Doll Man.

Sam tells the assembled heroes about Earth-X and how he recruited some Earth-Two heroes to help out over there.

Retrieved from "https://heykidscomics.fandom.com/wiki/All-Star_Squadron_Vol_1_31?oldid=1409051"
Community content is available under CC-BY-SA unless otherwise noted.