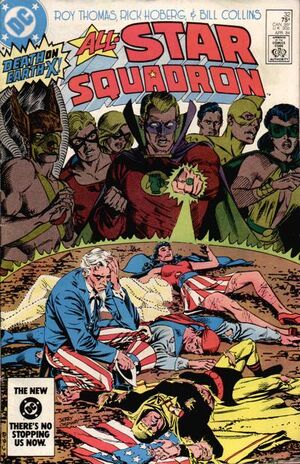 Appearing in "Crisis on Earth-X! The Prequel"Edit

Synopsis for "Crisis on Earth-X! The Prequel"Edit

Uncle Sam reveals how he first crossed into Earth-X, then came back to Earth-Two to gather his original Freedom Fighters, including Hourman, who is now suffering negative chemical reactions to his Miraclo pills. The first Freedom Fighters died when a Japanese Zero rammed them. Midnight confirms that he and the stricken Doll Man fought Baron Blitzkrieg on Earth-X. The heroes learn that Nazi saboteurs are attacking four of their home bases and divide into six groups, one each to stop the saboteurs in each town, the fifth to fight off a Japanese invasion attempt at Santa Barbara, California, and the sixth to go with Uncle Sam to Earth-X. The Spectre is forbidden by the Voice to follow the new Freedom Fighters to their destination.

Retrieved from "https://heykidscomics.fandom.com/wiki/All-Star_Squadron_Vol_1_32?oldid=1409052"
Community content is available under CC-BY-SA unless otherwise noted.