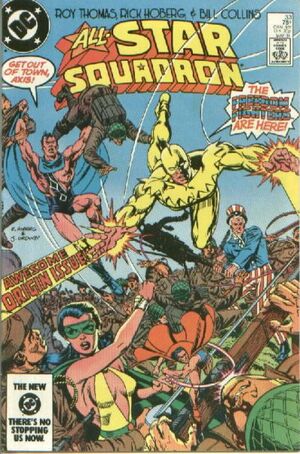 Appearing in "The Battle of Santa Barbara -- Times Two!"Edit

Synopsis for "The Battle of Santa Barbara -- Times Two!"Edit

The Spectre, held immobile by the Voice between Earths-2 and X, sees the Freedom Fighters battling the Japanese on Earth-X, but the heroes are stopped cold by the sight of Baron Blitzkrieg holding Hourman hostage. On Earth-2, the All-Star Squadron encounters the aquatic Neptune Perkins, a seafaring mutant who helps them attack a Japanese sub, and Tsunami, a Japanese-American super-villainess who tries to rally other Japanese-descended citizens in the area to her cause. The Spectre attempts to return to Earth-2, only to discover that his efforts are threatening to draw both Earth-2 and Earth-X together, and possibly annihilate both.

Retrieved from "https://heykidscomics.fandom.com/wiki/All-Star_Squadron_Vol_1_33?oldid=1409053"
Community content is available under CC-BY-SA unless otherwise noted.