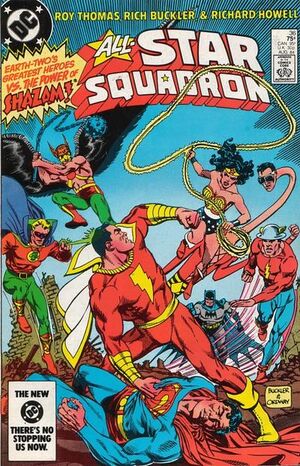 Appearing in "Thunder Over London!"Edit

Synopsis for "Thunder Over London!"Edit

The Justice Society is beset by the onslaught of Captain Marvel, who is now in thrall to Adolf Hitler and has orders to attack the Allied nations and Superman specifically. In London, the All-Stars meet a boy and girl who say magic words and are transformed into Mary Marvel and Captain Marvel, Jr.

Retrieved from "https://heykidscomics.fandom.com/wiki/All-Star_Squadron_Vol_1_36?oldid=1409056"
Community content is available under CC-BY-SA unless otherwise noted.