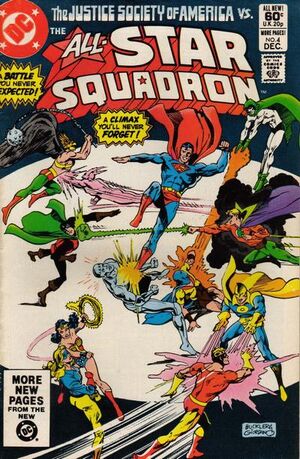 Appearing in "Day of the Dragon King!"Edit

Synopsis for "Day of the Dragon King!"Edit

After seeing the carnage wrought at Pearl Harbor, the Justice Society of America dispatches some of its most powerful members along with some others and some All-Star Squadron heroes to take direct action against the Axis. But Hitler and Tojo have cast a magic spell with certain artifacts that place the magically-based JSA'ers under their power, once they enter the Axis's sphere of influence.

Retrieved from "https://heykidscomics.fandom.com/wiki/All-Star_Squadron_Vol_1_4?oldid=1409023"
Community content is available under CC-BY-SA unless otherwise noted.