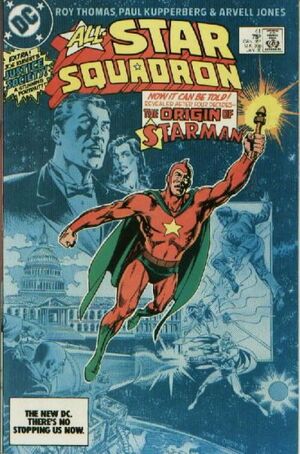 Appearing in "Catch a Falling Starman!"Edit

Synopsis for "Catch a Falling Starman!"Edit

After Firebrand, Green Lantern, and Hawkman save Starman from falling unconscious to his death, Tarantula remembers the origin story the hero provided for John Law's book on super-heroes. After aiding Batman and Robin somewhat in a case, gaining a gravity rod designed by Professor Abraham Davis from his cousin Sandy, and later learning she had become the crime-fighting Phantom Lady, Ted Knight powered Davis's rod with "unknown cosmic rays", designed a costume, and offered his services to the FBI as Starman.

Retrieved from "https://heykidscomics.fandom.com/wiki/All-Star_Squadron_Vol_1_41?oldid=1409061"
Community content is available under CC-BY-SA unless otherwise noted.