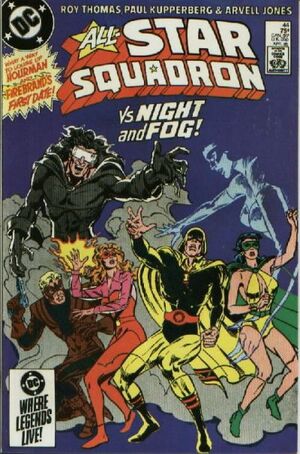 Come in and join the party.

Appearing in "Night and Fog!"Edit

Synopsis for "Night and Fog!"Edit

At a costumed ball, Firebrand's father "Emerald Ed" Reilly is killed by two Nazi super-beings, Night and Fog, for refusing to aid Hitler in delaying war production anymore. Firebrand and the other All-Stars battle the villains, but are only successful in driving them off.

Retrieved from "https://heykidscomics.fandom.com/wiki/All-Star_Squadron_Vol_1_44?oldid=1409064"
Community content is available under CC-BY-SA unless otherwise noted.