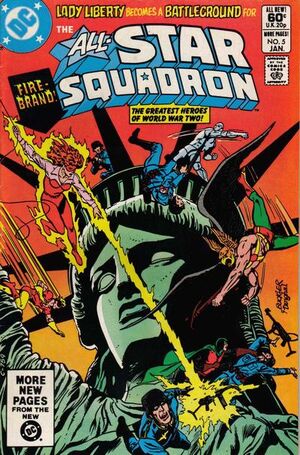 Appearing in "Never Step On A Feathered Serpent!"Edit

Synopsis for "Never Step On A Feathered Serpent!"Edit

The Justice Society of America vote to disband for the duration of the war, as all of its members save Superman, Batman, and the Spectre are joining the armed forces to fight the Axis. But several All-Star Squadron heroes must go to Mexico to stop Shiera Sanders, alias Hawkgirl, from being sacrificed on an altar by a Nazi agent called the Feathered Serpent.

Retrieved from "https://heykidscomics.fandom.com/wiki/All-Star_Squadron_Vol_1_5?oldid=1409024"
Community content is available under CC-BY-SA unless otherwise noted.