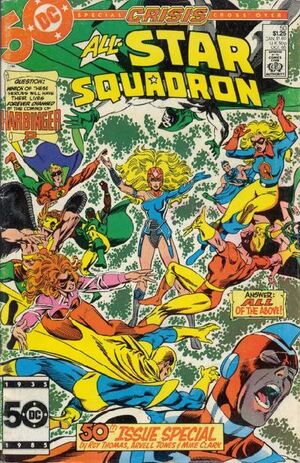 Tis an odd custom of your society, Robotman -- this so-called "signing of autographs."

Eight Justice Society members are captured by Nazi agents working for Hans Heinrich Gootsden and shot into space in eight rockets destined for the other worlds of the solar system. But the entrance of Harbinger into the Earth-Two universe causes the rockets to travel into eight alternate dimensions, whose planets bear life. Harbinger snatches Firebrand II away to add to the collection of heroes at the Monitor's satellite, accidentally breaking Steel free and sending him to Earth-One. Uncle Sam recruits Phantom Lady, Plastic Man, and several other heroes to aid him in the battle against Nazis on Earth-X. In Boston, Libby Lawrence and Johnny Chambers are no sooner wed than they find Green Lantern asking for their help. The three of them try to follow Harbinger and Firebrand, but are sent to another universe as the warp phases out.

Retrieved from "https://heykidscomics.fandom.com/wiki/All-Star_Squadron_Vol_1_50?oldid=1409070"
Community content is available under CC-BY-SA unless otherwise noted.