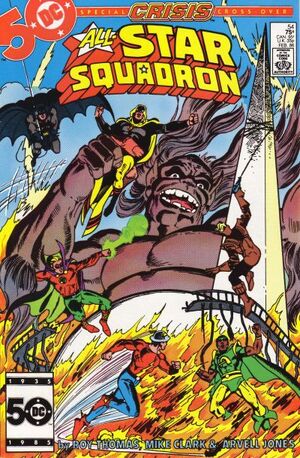 Appearing in "The Crisis Comes To 1942"Edit

Synopsis for "The Crisis Comes To 1942"Edit

Red skies continue to appear over 1942 Earth-Two as the All-Stars conclude their battle with the Monster Society of Evil. Meanwhile, in 1985, Harbinger sends Firebrand II and a group of heroes from Earth's past to Cape Canaveral in an attempt to prevent the Ultra-Humanite from stealing a space shuttle.

Retrieved from "https://heykidscomics.fandom.com/wiki/All-Star_Squadron_Vol_1_54?oldid=1409074"
Community content is available under CC-BY-SA unless otherwise noted.