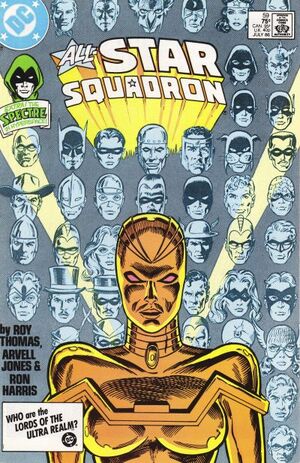 Appearing in "Out of the Ashes... Mechanique"Edit

Synopsis for "Out of the Ashes... Mechanique"Edit

A general meeting of the All-Star Squadron draws most of the costumed heroes in America, including Aquaman. The Squadron, divided on what to do about Mekanique, hold a vote as to whether to allow Robotman and Chuck Grayson to keep working on the woman-robot, or to take her out of his hands. The vote goes against Robotman, but the Squadron finds it a hard decision to enforce. Meanwhile, on an alternate Pluto, the Spectre makes peace between two warring races.

Retrieved from "https://heykidscomics.fandom.com/wiki/All-Star_Squadron_Vol_1_59?oldid=1409080"
Community content is available under CC-BY-SA unless otherwise noted.