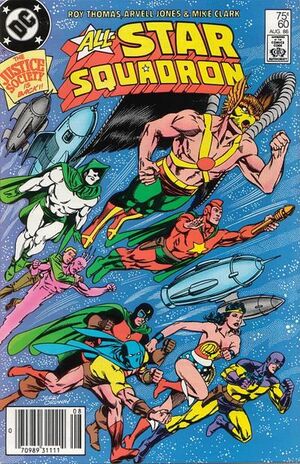 Appearing in "The End of the Beginning"Edit

Synopsis for "The End of the Beginning"Edit

As the Spectre and Johnny Thunder's Thunderbolt combine their powers to bring the banished Justice Society members back from being in various dimensions of space, the All-Star Squadron members again confront Mekanique while Robotman tries to reason with them that her mission is simply preventing a disaster in the future she came from from happening. Taking her at her word, Green Lantern and Firebrand go off to fulfill this task, rescuing a young child from being hit by a car. Upon their return, most of the All-Star Squadron members gather for a picture taken together. Following this, Mekanique secretly reveals to Robotman that her intended mission was NOT to prevent the disaster of the future from happening, BUT to make sure it was fulfilled. She also reveals that she has been holding back the sweeping effects of the Crisis on Infinite Earths to make sure her task was completed, and so now lets the effects take hold, causing Robotman to have no memory of what Mekanique has told him. The developed picture that reaches the hands of President Franklin D. Roosevelt reveals that those effects have truly taken hold.

----
Retrieved from "https://heykidscomics.fandom.com/wiki/All-Star_Squadron_Vol_1_60?oldid=1483515"
Community content is available under CC-BY-SA unless otherwise noted.