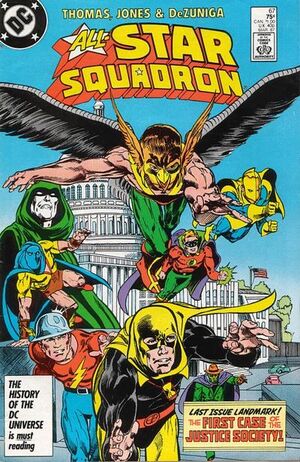 For America - and democracy!!

Appearing in "The First Case of the Justice Society of America!"Edit

Synopsis for "The First Case of the Justice Society of America!"Edit

The Justice Society of America arrives at the Capitol Building in Washington in response to an emergency summons. F.B.I. director J. Edgar Hoover tells them about an insidious plot by a group of Fifth Columnists to subjugate America from within. He hands each member of the team special orders, and gives them their formal battle cry, "For America – and democracy!" Each member of the team reads their orders, and then sets out on individual missions.

Green Lantern investigates sabotage at a power station and encounters a German agent called the Baron. The Baron attacks Green Lantern with an electron gun, but GL manages to capture him. He destroys the Baron's dirigible and brings him to justice.

The Flash investigates a paramilitary unit muscling workers at a factory in Detroit. He exposes several members as Nazi agents and inspires other workers to join the fight as well. Afterwards, the Flash races off to stop a bomb that had planted on the S.S. Liberty.

The Spectre flies to Pittsburgh where he looks into acts of sabotage at a munitions plant. He finds a criminal preparing to detonate a bomb, and uses his vast powers to stop him. Afterwards, he learns that the man works for Fritz Klaver, based out of Toledo, Ohio.

In Oklahoma, Hourman goes undercover as a laborer at an oil drilling facility. He routes another group of Nazi agents and engages them as they try to flee in their roadster. Hourman hurls a piece of wood at the driver, forcing him to crash his vehicle into a piece of scaffolding.

Doctor Fate has a similar experience on board a fishing vessel. He stops Nazi agents from sinking the ship with a bomb-launcher, then opens the sea beneath them where their vessel is attacked by a mystical creature. Fate calls the beast off and intimidates the men into telling him who they actually work for.

The Sandman drives out to El Paso, Texas, where Nazi hoodlums are attempting to muscle the staff of the El Paso Patriot. They threaten to put the paper out of business unless they stop printing articles critical of Adolf Hitler. The Sandman finds the criminals and renders them unconscious with his gas gun.

Hawkman meanwhile, flies out to California where he prevents saboteurs from destroying an American test bomber.

The Atom goes to his familiar stomping grounds at Calvin College where he discovers a group of Bundists physically abusing other students, forcing them to join their cause. The Atom decides to take them down in his civilian identity of Al Pratt. After beating them up, he forces the group to sing "God Bless America". Soon after, he learns about Fritz Klaver and heads off to Toledo, Ohio. The Atom enters Klaver's headquarters, but Nazi agents manage to capture him. He has little to fear however, as the rest of the Justice Society show up to save the day. While the heroes fight the Nazi agents, Fritz Klaver retreats and threatens to push a button that will blow up the entire building. Doctor Fate uses his magic to stall Klaver's actions, and whisks the entire building and everyone inside to Washington, where they hand deliver Klaver and his men to J. Edgar Hoover.

Retrieved from "https://heykidscomics.fandom.com/wiki/All-Star_Squadron_Vol_1_67?oldid=1517438"
Community content is available under CC-BY-SA unless otherwise noted.