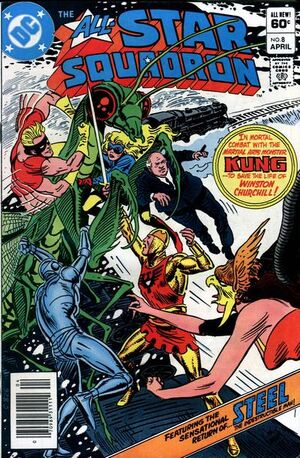 I don't know how you pulled that little stunt, fella--but if I were you, I'd turn myself into the North Wind, and blow!

Appearing in "Afternoon of the Assassins!"Edit

Synopsis for "Afternoon of the Assassins!"Edit

The All-Star Squadron and a new arrival, Steel, save Winston Churchill from another assassination attempt, though Steel is injured in the incident. Churchill is given Steel's diary and, along with Liberty Belle, learns the hero's origin and how he saved the prime minister from an earlier attempted murder. But Baron Blitzkrieg and Zwerg are tracking the train on which Churchill travels, and the Japanese super-assassin known as Kung attacks.

Retrieved from "https://heykidscomics.fandom.com/wiki/All-Star_Squadron_Vol_1_8?oldid=1409028"
Community content is available under CC-BY-SA unless otherwise noted.