All-Star Western: Guns and Gotham is a Jonah Hex storyline published as part of The New 52. Following the timeline reboot in Flashpoint, it establishes his continuity in the DCnU. It's the debut arc of All-Star Western by 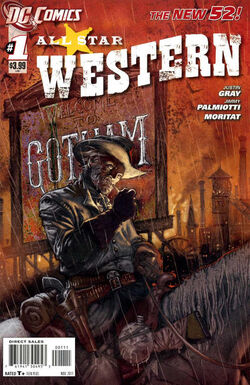 All-Star Western: Guns and Gotham is a Jonah Hex storyline published as part of The New 52. Following the timeline reboot in Flashpoint, it establishes his continuity in the DCnU. It's the debut arc of All-Star Western by Justin Gray, Jimmy Palmiotti and Moritat. Hex is shown moving to Gotham City, where he becomes its resident protector in the 19th Century and teams up with Amadeus Arkham. This storyline is preceded by Bury Me in Hell and followed by The War of Lords and Owls.

Jonah Hex arrives in Gotham City, hired by Amadeus Arkham to solve a series of murders. The two men are immediately at odds as a man of violence and a man of learning. They investigate the deaths of several prostitutes, murdered by a man who wears a silver skull ring. In attendance at one of Mayor Cobblepot's social galas, they realize that most of the city's elite wear these rings and they form a secret society.[1] Hex and Arkham are assaulted at Arkham Manor by a dozen armed men wearing masks, but Jonah guns them all down single-handedly. They learn that the secret organization calls themselves the Religion of Crime, and then immediately mount a counter-offensive to rescue the Chief of Police from their clutches.[2] Amadeus makes his first kill to save Jonah by picking up his gun. They hold a private meeting to discuss strategy with the honest lawmen involved, but they're interrupted by a Gatling gun and everyone but Hex and Arkham are slaughtered. Jonah Hex decides that he's going to leave Gotham for good as it's brought him nothing but trouble.[3]

In the first back-up feature, El Diablo runs into a town infested by Zombies. He takes up with the last group of survivors, holed up inside the only building that hasn't been overrun.[2] Diablo fights the villain behind the zombies, Black River the Spirit Warrior, a Native American with untold forgotten magics who has declared war on the white man for his crimes. He stops the Zombies, but Black River bests him and he is forced to retreat to his host body Lazarus Lane.[3]

In the second back-up feature, a vigilante with seemingly supernatural abilities named the Barbary Ghost searches for the man who killed her father. Her family had been immigrants from China, and her father had a dispute with local gangsters when he refused to pay protection money.[4] They slaughtered her entire family, leaving her alone with her grandfather. Having constructed the ghost as an elaborate illusion to strike terror into the hearts of her enemies, she has sworn revenge.[5] Tracking down the gangster Bo Long, she eventually finds him and slaughters his men while he escapes. Eventually she catches up to him on a train, and executes him in front of the other passengers. Before he dies, he reveals that her mother is still alive and he sold her into prostitution. The Ghost rides off into the sunset with her grandfather in search of the last surviving member of their family.[6]

Retrieved from "https://heykidscomics.fandom.com/wiki/All-Star_Western:_Guns_and_Gotham?oldid=1516493"
Community content is available under CC-BY-SA unless otherwise noted.