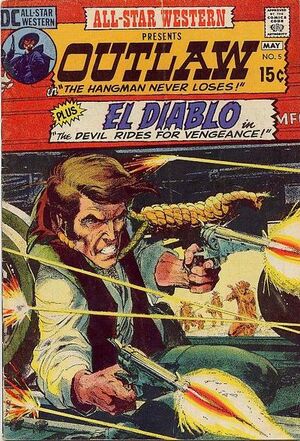 Appearing in "The Hangman Never Loses"Edit

Synopsis for "The Hangman Never Loses"Edit

When Rick Wilson's father Samuel gets the drop on him and arrests him, Rick tries to get away when Samuel's deputy arrives with Stammerin' Sam, one of the Gunpowder Gang. However the attempt does not work and the two are locked up in the same jail. This is during Founding Day celebrations where a golden horse shoe as a prize for a shooting contest.

However, they are freed by Gunpowder and his minion Peg-Leg, escaping the law they hide out at Gunpowders hideout, an abandoned train station. When Gunpowder believes that Rick is going to try and take control of the gang, they have him tied up in a train with a bunch of TNT in hopes of using it as a diversion to steal the horse shoe.

When Rick free's himself thanks to his hawk, and stamps out the TNT when the train crashes, Rick and his father team up to stop the gang and kill them all. Deciding to bury the hatchet after working together, Samuel agrees to let Rick be a Texas Ranger, and the two agree to make up a story that Rick was only pretending to be a criminal as a "secret" member of the Rangers. After Rick wins the shooting contest.

Appearing in "The Devil Rides for Vengeance"Edit

Synopsis for "The Devil Rides for Vengeance"Edit

Retrieved from "https://heykidscomics.fandom.com/wiki/All-Star_Western_Vol_2_5?oldid=1409182"
Community content is available under CC-BY-SA unless otherwise noted.