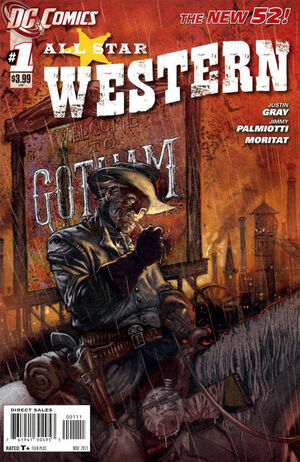 Damn. Seems the Butcher wants ta make this personal. Ah can do that.

Appearing in "No Rest for the Wicked"Edit

Synopsis for "No Rest for the Wicked"Edit

Jonah Hex arrives in Gotham and almost immediately, he is regarded with suspicion and derision from the citizens, though he can hold his own against the crooks of Bandit's Roost.

Across town, Dr. Amadeus Arkham answers a summons from Detective Lofton of the Gotham City Police Department, to provide psychological consultation with regard to a recent string of murders. Unfortunately, Police Chief Cromwell is on the scene as well, and takes less kindly to Arkham's early theories on psychology than the detective.

The murder victim is a prostitute, and at each crime scene, the word "fear" is scrawled on the wall in another language with the victim's blood. In this case, the word is the latin "metus." Arkham suggests that it is in the killer's nature to facilitate fear - and as yet, he has been quite successful. From the doorway, a voice suggests that perhaps the killer is afraid that he won't be caught.

It is the voice of Jonah Hex, who has been hired by the detective as a bounty hunter, to help catch the Gotham Butcher. Hex's demeanor, haggard appearance, and the fact that he's sporting a confederate uniform from the civil war are particularly abrasive for Chief Cromwell, and he attempts to have both Hex and Arkham thrown out. However, Arkham proposes that he and Jonah Hex conduct a separate investigation together, and present their findings to the police. The Chief begrudgingly agrees.

Hex examines the body and determines that the killer is a strong man, probably a man who works with his hands. Likewise, his penchant for killing women exclusively suggests that he has some kind of sexual dysfunction. Arkham, on the other hand, believes that the killer must be highly affluent to have the knowledge of other languages required to write in a different language at every crime scene.

Later, Arkham and Hex head to a bar in one of the seedier parts of the city. After some awkward small talk, Jonah Hex weaves through the patrons until he spies Belle, a prostitute that he knows. He attempts to question her, but the man she's already with doesn't take kindly to his presence, and the resulting bar brawl is violent. From afar, Arkham makes speculation as to what kind of history could lead the bounty hunter to such lifestyle. Hex comes out relatively unscathed, and returns to his line of questioning.

Belle reveals that the killer is not known by name or face, but all the prostitutes know that he exists. The killer was seen to have picked up the latest victim in a big black carriage. His hand was like a claw, and he wore a silver ring shaped like a skull. As thanks, he offers her a wad of cash and tells her to avoid prostituting for a few days until he sorts the case out. After sharing his information with Arkham, Hex finds a place to sleep.

He is given a rude awakening when Detective Lofton and Amadeus Arkham arrive at his door with news of another murder. This time, the victim is Belle. At the crime scene, they arrive to find the girl strung up from a girder with her face disfigured. On the wall behind her is written "Jonah Hex Leave Gotham." The bounty hunter takes it personally.

Two days later, Arkham muses further on Hex's psychological profile, having witnessed the man carve a trail of blood through Gotham, following clues to the killer's identity. Their mutual conclusion is that there are at least two men involved in the killings, one a man of wealth and intelligence, and the other being his helper, a strong man of limited intelligence.

That night, the pair of them attend a charity event being held by Mayor Theodore Cobblepot, hoping that they will encounter the killer there. Upon their arrival, Chief Cromwell sees them and embarrassed, he tries to shoo them away. Cromwell is interrupted by the mayor, who invited Arkham in the first place, and is intrigued to meet Jonah Hex.

Hex, meanwhile, has an encounter with a Doctor Dupree and a Colonel Hammersmith. The Colonel is wearing a Union uniform, and is put out by the bounty hunter's Conferderate uniform. Arkham happens to notice that Dupree is wearing a silver ring with a skull on it. He inquires, and the Doctor explains that he belongs to a group of like-minded individuals seeking the betterment of society.

Abruptly, Jonah Hex decides it's time to leave, and drags Arkham behind him. The psychologist protests, pointing out that they had likely found the killers. Warily, Hex points out that nearly all of the attendees at the party are wearing the rings. He explains that it means that things are about to get a lot more dangerous for them.

Retrieved from "https://heykidscomics.fandom.com/wiki/All-Star_Western_Vol_3_1?oldid=1590992"
Community content is available under CC-BY-SA unless otherwise noted.