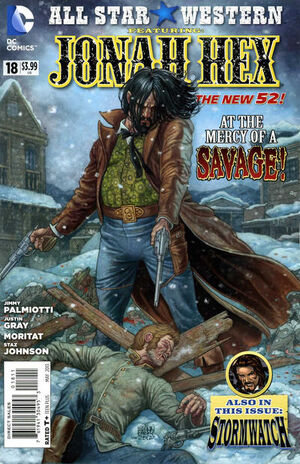 Months after Vandal Savage arrived in Gotham City, the poorer regions of the city were overtaken by a plague of what was decided to be cholera. Mayor Cobblepot had the affected neighbourhood quarantined, and it was forbidden for any of the healthy and wealthy to give food or supplies to the diseased. Catherine Wayne could not abide by that decree, and secreted food over the wall from time to time. Unfortunately, she was rewarded for her charity by being kidnapped by the people she had tried to help. However, she was soon taken from those people by Vandal Savage, who admitted to her that he was the source of the plague, and that he intended to use her to blackmail Alan Wayne into transferring over his assets to him.

Alan Wayne, meanwhile, had sent a group of bounty hunters to search for Catherine, of which only Jonah Hex and Dr. Amadeus Arkham remain alive. With the cold wind and snow blowing, Hex leads the way to a bar, and the pair of them sneak down a hidden trap door behind the bar to a room. Down below, Blackburn, the bartender is surprised to see them there. There is a woman named Mille down there with him, who has fallen under the delusion that a doll is her living baby, whom she actually lost to the plague and cold some time earlier. Blackburn warns them not to speak of it, and begs that they help the pair escape. Hex refuses to take them, asking only for a few bottles of alcohol for the road. Arkham is disturbed by Hex's callousness, and assures Blackburn that they will help. The diminutive bartender responds that he is not as helpless as they might think, revealing that he has a crate of dangerous looking German hunting pistols at the ready.

With a blizzard on the way, Savage drags Catherine outside, intent on finding better shelter. However, they are attacked by wild dogs and diseased citizens, requiring him to kill them all. In the meantime, Catherine stumbles away through the snow in search of help for herself. She finds herself walking over the frozen Gotham River, and slipping, she discovers that numerous human bodies have become trapped there under the ice - more victims of Savage's mad plan.

Fortunately, it is Arkham who discovers Catherine first, but Savage is not far behind. Jonah Hex fires his pistol at the man, but Savage deflects the bullets with his pistol, warning that he could have deflected those bullets back at Hex to kill him. He explains that in his many years of immortality, he has put his stamp on nearly every empire known to man. Tiring of Savage's condescending speeches, Hex simply blasts him in the chest with a shotgun, and he falls. Taking Savage's sword from his limp hand, Hex and Arkham lead the way through the sewers back outside the quarantine.

Though Savage was thought dead and buried in Slaughter Swamp, he is very much alive.

Arkham, meanwhile, returns home to hear his mother announcing that Jonah Hex has left for the west, having received a letter of interest recently. He made a point of indicating his annoyance with Arkham. That evening, as Hex boards the train from Gotham to the western territories, Arkham bursts into his train car, explaining with some excitement how he had managed to deduce where Hex had gone. He expresses his interest in documenting the wonders of the untamed west, but Hex, with a grim expression, warns that he will wait only ten seconds for Arkham to get himself and his baggage off of the train.

As he is thrown from the train, Arkham bemoans the fact that, despite all they had been through, Hex seems entirely disinterested in continuing their bizarre, yet functional relationship.

Somewhere, a farmer rushes through the woods, attempting with some effort to escape from a monstrous humanoid swine. After stumbling briefly, he winds up with a chain noose around his neck, and hanged to death from a tree.

Elsewhere, Dr. Terrence Thirteen arrives in the spiritualist community of Lily Dale, New York, which he regards as a remnant of adherence to superstitious folly in a world that is well on the way to industrial advancement. Spiritualism, as far as Lily Dale is concerned, is a belief that the spirits of the dead have the ability and inclination to communicate with the living. Many of its population are mediums, who claim to be able to speak to those spirits through séances.

Dr. Thirteen, has come, naturally, to debunk that way of thinking, and to solve a string of murders which are claimed to have been the work of a demonic beast. Noting the irony of his having been hired by spiritualists, Dr. Thirteen meets with Louise Skidmore, who informs him that the night before his arrival, another murder occurred.

At the scene, Thirteen wonders why, given their beliefs, the townspeople have not attempted to contact the killer, since it is thought to be a ghost. Ms. Skidmore explains that they have been unable to get any response from the killer. She warns him to be wary of disparaging the townsfolk's beliefs, noting that while there are false mediums, she is not false.

Left alone to his investigation, Thirteen discovers a set of tracks which he determines are most certainly those of a pig farmer. After making some inquiries, Thirteen learns that there is a nearby pig farm owned by a man named Thiessen. A devout and aggressive Christian, Thiessen refuses to simply turn himself in for murder. Still intent on reasoning with him, Dr. Thirteen points out that it must be aggravating for him, as a Christian, to see the town filling up with these spiritualists - perhaps so upsetting that he decided to ignore the commandment "Thou shalt not kill."

Angrily, Thiessen becomes physically violent, but even at his great stature, he is no match for Thirteen's martial arts, learned from Master Wei in China. It is a simple enough matter after that to prove that Thiessen was the killer, and Thirteen gladly returns to Gotham City, where he has a brief meeting with his contemporary, Dr. Amadeus Arkham.

While working on a method for identifying fingerprints, Thirteen is suddenly interrupted in his lab by a man calling himself Adam One - strange, since there was no way for the man to have got in. Grinning, Adam One offers Thirteen the chance to see that the supernatural that the doctor has spent his life debunking is quite real.

Retrieved from "https://heykidscomics.fandom.com/wiki/All-Star_Western_Vol_3_18?oldid=1591225"
Community content is available under CC-BY-SA unless otherwise noted.