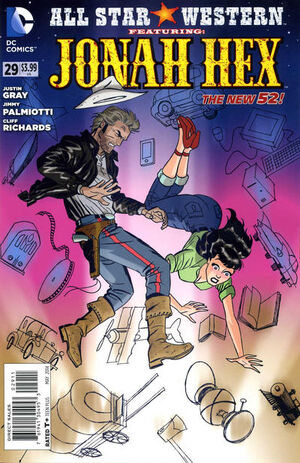 After being sent back in time to the old west - Jonah Hex's home time - Jonah and his companion Gina Green have found themselves surrounded by Apache warriors, who don't believe Hex is who he says he is, given that he had his disfigurement reversed in the future. Warning Gina to avoid taking a bullet, Jonah initiates a gunfight, and as the superior marksman, he unhorses several of the Apache before they abandon their attack. Unfortunately, Gina did not avoid getting shot, and took a bullet in the thigh. To her displeasure, she must do with what medical help Jonah can provide, as he takes a knife from a downed Apache and cuts the bullet from her flesh.

Hurting from the wound, Gina asks Jonah to tell her a story to take her mind off it. He claims not to have any stories, so she asks if he's ever been married. He admits that he was, once, and she confides that she was too, having run off with her high school boyfriend. He comments that her story is boring, and finally agrees to tell a story of his own - though not a pretty one.

Some years ago, he'd met a man named McCabe who liked to tell stories. He had told Jonah how he'd built a house with his own hands, and lived there with his wife, children and mother. One night, though, his home was attacked by natives, and they set the house on fire with his family inside. He'd tried to save them, cutting a path for them to run, but they wouldn't run. Instead, he was captured by the natives and forced to watch as his family burned alive; slow, agonizing deaths.

Eventually, his rage had led him to escape, and he joined every hunting party to root out the redskins of any tribe, and kill them in vengeance. Jonah had responded that the tale was not unfamiliar to him, but that in the meantime, the law had changed and hunting tribes down on their own land had become a criminal offence. He'd come to collect the bounty on McCabe. The man responded that if he was to be charged on behalf of the native tribes, he would rather die, and Jonah would have to kill him. He had heard many tales of Jonah Hex, and one of those was that the bounty hunter had been raised by Apache, causing him to doubt Jonah's loyalties to their own race. The line of questioning annoyed Jonah, who pointed his gun at McCabe, warning him to come quietly. Unfortunately, Jonah failed to notice McCabe's son Eli sneaking up behind him with his gun raised.

Jonah, recalling McCabe's story, realized that the story had been a lie - McCabe didn't even have vengeance behind his hatred of the natives. At gunpoint, Jonah was forced to dig his own grave while McCabe taunted him with the truth. He feared for the nation and the white man's place in it, what with the return of land to the native tribes, the freeing of slaves, that the fifteenth amendment. As he continues, McCabe demanded tobacco and rolling papers from Jonah, who obliged, digging with no care for his captor's words. Eventually, though, both Eli and his father noticed the peculiar flavour of the tobacco, and it wasn't long before they began hallucinating. Jonah explained that he had given them a special Hopi blend of tobacco used for vision quests - white men didn't seem to have the same tolerance for it. Grimmacing, Jonah revealed that he hadn't come alone either, signalling to the warriors waiting in the trees to have at their prey.

Gina, of course, isn't especially satisfied with that story's end, and when she complains, she realizes that Jonah has fallen asleep already. Whipping a clutch of rocks at him, she demands that he come over and cuddle her to sleep, or she'll spend the whole night chucking stones at him.

Three days later, Gina is beginning to get dehydrated, but fortunately, Jonah spots the smoke from a hovel in the distance. Upon their arrival, they put their hands up to show their good intent, and Jonah introduces them in Diné Bizaad; the Navajo language. The woman who greets them there demands that he state their intentions, and he explains that they seek kinship and help in the form of food and water. The woman introduces herself as Yahana, and her daughter as Johona, agreeing to share what little they have. Gratefully, Gina takes the water skin from Johona, but soon collapses after only a few gulps. Gravely, Yahana confirms that Gina is dead.

Retrieved from "https://heykidscomics.fandom.com/wiki/All-Star_Western_Vol_3_29?oldid=1615030"
Community content is available under CC-BY-SA unless otherwise noted.