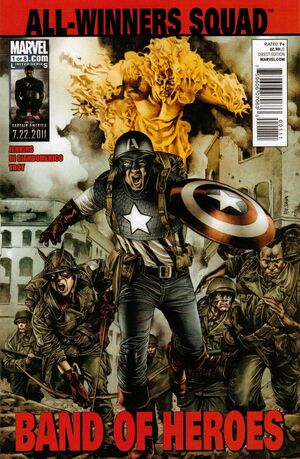 I lied to you, Alyssa. I lied to everyone. I was never rejected for military service. I was the Young Avenger.

Appearing in "We Were Soldiers Once...and Young"Edit

It’s World War II super-action as Captain America heads up a top-secret, all-hero unit of the U.S. military! But a mystery surrounding the Band of Heroes rears its ugly head in the present...and you won’t believe how deep it goes. Join the wartime adventures of the toughest, most exceptional band of soldiers in American military history, in this series by acclaimed writer Paul Jenkins (SENTRY: FALLEN SUN) and rising star Carmine Di Giandomenico (INVINCIBLE IRON MAN ANNUAL, IRON MAN 2.0)!

Retrieved from "https://heykidscomics.fandom.com/wiki/All-Winners_Squad:_Band_of_Heroes_Vol_1_1?oldid=1410197"
Community content is available under CC-BY-SA unless otherwise noted.