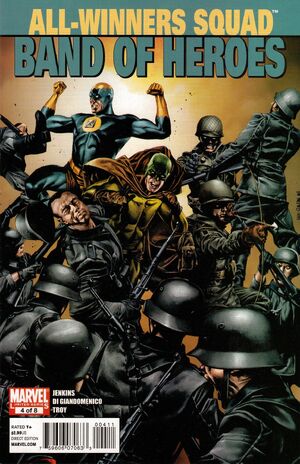 I can't go out there again, Slo-Mo. ... They told me they'd make a comic of me. Like it would just clean all of this away. But it's not going to. I've got too much blood on my hands. ... My job was in carpet sales. Not killing people. I didn't even want to be a hero like you guys. I can't control it, Slo-Mo. I keep thinking if I start killing again I'm not going to know how to stop. ... I'm so scared of what I'm becoming. ... I don't know if I'm more afraid to die or more afraid to live.

Appearing in "The Longest Day"Edit

Synopsis for "The Longest Day"Edit

Retrieved from "https://heykidscomics.fandom.com/wiki/All-Winners_Squad:_Band_of_Heroes_Vol_1_4?oldid=1410200"
Community content is available under CC-BY-SA unless otherwise noted.