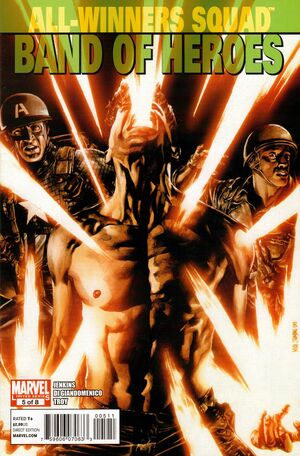 I knew I had betrayed him. Just as Merzah said I would. Only thing was, Merzah never said I wouldn't have a choice. Maybe to the others Frank Cortez looked like some kind of avenging angel that day. Like some kind of mystical god, or somethin'. All I could see was a man with all the hope sucked from his soul, because of what I did. I knew that very day he was going to die. An' when he did, it was going to be my betrayal that sent him to his grave.

Retrieved from "https://heykidscomics.fandom.com/wiki/All-Winners_Squad:_Band_of_Heroes_Vol_1_5?oldid=1410201"
Community content is available under CC-BY-SA unless otherwise noted.