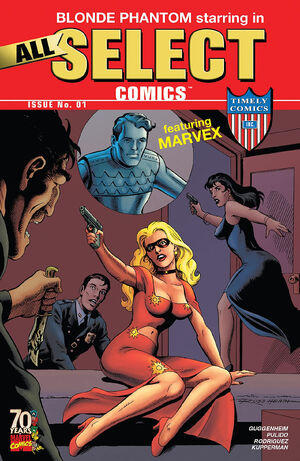 So this is the 21st century. I don't like it much. I'm going to go into space!

Appearing in "Murder on Another Planet"Edit

Meet Blonde Phantom – she’s gorgeous, quick-witted, and hard-boiled. There was never a case that wasn’t open-and-shut for this gun-toting, two-fisted knockout of a P.I. But has she still got what it takes to bust a mystery wide open in the modern Marvel Universe? Marc Guggenheim (AMAZING SPIDER-MAN) and Javier Pulido (CAPTAIN AMERICA 65TH ANNIVERSARY SPECIAL) turn the classic Blonde Phantom into Marvel’s newest hero! AND MORE! Writer/artist Michael Kupperman (Tales Designed to Thrizzle) takes on Marvex, the Super-Robot, in a hilarious bonus special feature!!

Retrieved from "https://heykidscomics.fandom.com/wiki/All_Select_Comics_70th_Anniversary_Special_Vol_1_1?oldid=1430730"
Community content is available under CC-BY-SA unless otherwise noted.