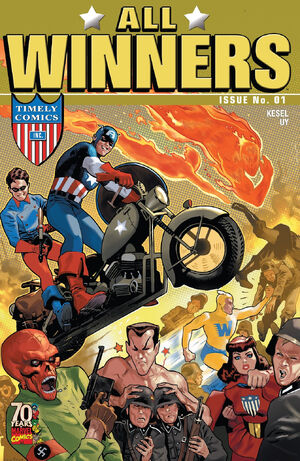 Captain America and Bucky…the Human Torch and Toro…the Sub-Mariner…Miss America…the Whizzer…THE ALL-WINNERS SQUAD! It's 1946 and World War 2 is over, but the memory of those lost in the War haunts everyone— especially when Times Square is overrun by undead soldiers wanting their lives back! And leading this tattered battalion are the two casualties the All-Winners Squad can't fight— the original Captain America and Bucky! Plus: a surprise romance that has all the tabloids a-twitter! "Old Soldiers Never Die…" by Karl Kesel (MARVEL APES) and Steve Uy (AVENGERS: THE INITIATIVE) Buy Bonds! And this comic!

Retrieved from "https://heykidscomics.fandom.com/wiki/All_Winners_Comics_70th_Anniversary_Special_Vol_1_1?oldid=1657319"
Community content is available under CC-BY-SA unless otherwise noted.