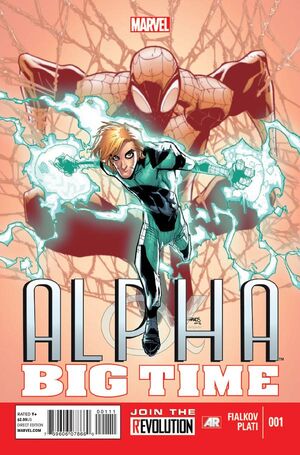 Appearing in "I Used to be Big Time"Edit

• From the pages of AMAZING SPIDER-MAN, get ready for the greatest hero who ever existed…EVER!

• Alpha was having an awesome time of it, till that buzz-kill Spider-Man made him quit being a hero. But that was then …and this is NOW!

• Josh Fialkov & Nuno Plati (Amazing Spider-Man) reunite to tell the tale of a hero whos about to hit the BIG TIME!

Retrieved from "https://heykidscomics.fandom.com/wiki/Alpha:_Big_Time_Vol_1_1?oldid=1727492"
Community content is available under CC-BY-SA unless otherwise noted.