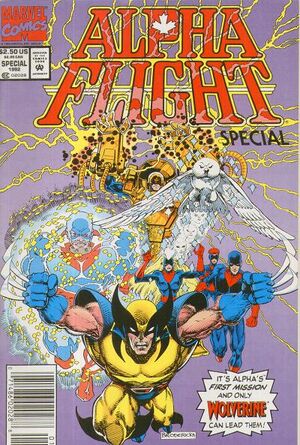 If you want someone to wear that suit so badly, have the courage of your convictions - And wear it YOURSELF!

Detective Bernard is cornered by corrupt cops and kills two. Logan arrives and fells the last one, then gets the Prime Minister to clear Bernard and transfer him to Dept. H. Egghead comes to Canada and assembles a team of super-villains. Bernard is given Hudson's first exoskeleton, and the team has its first training session. It doesn't go well, and Hudson tells Logan, "Second chances are what the Flight is all about." He wants to use Jodi, a girl with the ability to mentally manipulate metal, who is so afraid of her own mutant power that she has become a basket case. Egghead announces his intention to launch a nuclear missile at New York City unless the US turns over its armed forces to him. He knows it will never happen, but wants an excuse to bomb New York so his next threat will be taken seriously. The Flight attacks, and with some difficulty overcomes the villains. But Egghead has had time to start the detonation sequence. Elmo transmutes the missile into light and absorbs the energy, exploding himself into auroral light.

Michael pulls Snowbird from the team, Bernard quits, and Mac decides to split the rest into senior and junior teams.

This is the first time, chronologically, Wolverine is seen wearing his classic uniform.

Retrieved from "https://heykidscomics.fandom.com/wiki/Alpha_Flight_Special_Vol_2_1?oldid=1430529"
Community content is available under CC-BY-SA unless otherwise noted.