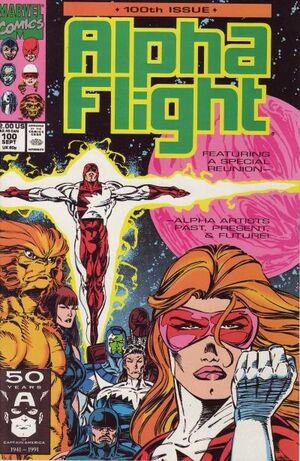 Appearing in "The Final Option (Part 4): Decisions of Trust!"Edit

Synopsis for "The Final Option (Part 4): Decisions of Trust!"Edit

Captain America, Black Widow, Diamond Lil, Northstar, Puck, Sasquatch and She-Hulk are in Toronto, preparing for the final attack of the Consortium. The invulnerable members shield the others as they retreat to a metro station, though the door is sealed behind them. Once there, Captain America forms the plan to infiltrate and destroy the alien mother-ship. They take the tunnel to emerge from a metro station a few blocks away, where Lil, She-Hulk and Sasquatch while Northstar is sent to commandeer a ship to use, which he, Captain America, Puck and Black Widow can use to reach the mother-ship, claiming they have a radiation leak.

Once aboard, Puck and Widow clear the communications complex, severing the cybernetic links of the aliens working there and ordering a recall of the assault. Captain America and Northstar fight to the engine room, where they find the ship is being powered by the energies of a miniaturized, uninhabited planet. Black Widow tells them they have twenty minutes to leave the ship before it warps out into space. On the planet Quwrll, Vindicator is still completely controlled by his biomechanical components as he asks the other heroes on Quwrll to defeat Galactus and save the The Qwrlln. Guardian asks the Qwrlln to explain how they ended up on the planet and they say that they learned of Galactus, which prompted them to study other worlds to learn more about his actions. They discovered James Hudson barely alive on Ganymede and, having learnt of the defeat of Galactus by the Fantastic Four and the Silver Surfer, they changed Hudson's biomechanical structure to help him and ensure that he and his fellow superhumans would help the Qwrlln should the need arise.

The heroes are incensed by the story as Vindicator has been struggling between his human and mechanical sides for some time and the extremes they had gone to protecting their race. However, they decide they must stop Galactus, who instructs Nova to detain them without harming them as he has pledged never to harm Earth. Nova is easily defeated and Windshear is sent to keep her out of the fight. Galactus tries converting their physical forms into energy until he can finish consuming the planet, but the change in dimensional plane causes his abilities to be severely impaired. He resorts to physical force after Box and Hercules manage to topple him.

Galactus manages to capture Heather and threatens to kill her if he is not allowed to feed. The mechanical part of Vindicator believe they should continue regardless, but it conflicts with his love for his wife, causing him to regain control and launch an electromagnetic assault which sabotages Galactus' internal energy flow, defeating him. Galactus overhears the heroes mention the Consortium and, as they use planets for energy sources aboard their mother-ships, agrees to let Quwrll be teleported back to its previous dimension and the heroes to Earth if the Consortium mother-ship is brought to him to be consumed.

Vindicator has returned to his mechanical state and the Qwrlln and Galactus have created a transdimensional warping device. However, Vindicator and Guardian's electromagnetic flux is required to energize it, which Vindicator knows will kill them. They link hands to unite frequencies and Heather tells James she has always loved him. As the heroes in Toronto clear the ship with ten seconds to spare, Vindicator throws Heather to safety to complete the energizing unassisted. His humanity returns in time to tell her he loves her and always will. The Consortium ship is sent for Galactus to devour and the heroes return to Earth and Guardian informs the others of Mac's death.

Retrieved from "https://heykidscomics.fandom.com/wiki/Alpha_Flight_Vol_1_100?oldid=1384356"
Community content is available under CC-BY-SA unless otherwise noted.