Start a Wiki
Part of the 'No Future' story arc 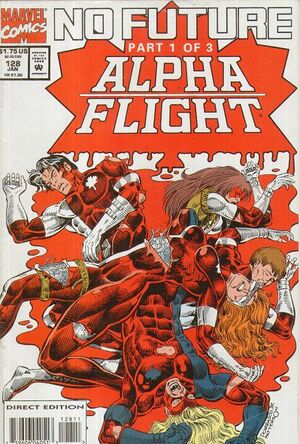 I am GUARDIAN. More than a name, it was a DUTY I inherited from my late husband Mac, the original Guardian. A duty to SAFEGUARD the country we both held so dear.

Most of this issue is a shared dream between the team members of Alpha Flight that reveals to them a glimpse of Canada's dystopian future.

In this flash-forward, Joshua Lord has seized Canada. Alpha Flight is now an underground band of rebels who have decisively lost the battle for Canada. They decide that they're only option is to retreat the country and warn the rest of the world. Joshua Lord has put up a psy-net around the border of Canada, keeping the rest of the world from knowing what's happening within the borders.

Alpha Flight makes it to the border, but are ambushed by a platoon of Hardliners, along with an invisible foe that they can't seem to fight back against. The entire Alpha Flight team is killed.

It's at this point that Heather wakes up in her living room. Before she can get her bearings, a call comes in from Reginald Fork, leader of a present-day Hardliner platoon that Alpha Flight had defeated earlier. He has captured Alpha Flight member Feedback and is demanding a rematch.

Retrieved from "https://heykidscomics.fandom.com/wiki/Alpha_Flight_Vol_1_128?oldid=1519738"
Community content is available under CC-BY-SA unless otherwise noted.