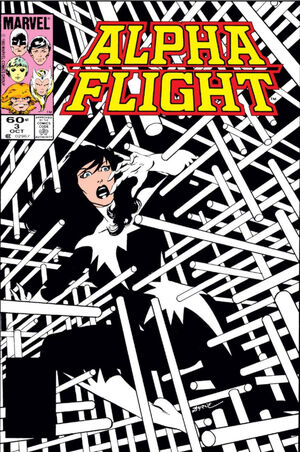 10 years ago
James MacDonald Hudson sits in his apartment in Edmonton. He ruminates over the events that led him to break into the Am-Cam building to steal their cybernetic super-suit. Former Am-Cam secretary, Heather McNeil, stops by the house armed with a fresh supply of groceries. She sees the helmet to the cyber-suit sitting on the coffee table and realizes that Mac is the one who broke into Am-Cam the previous evening. Heather spontaneously declares her love for Mac, but Hudson is reluctant to reciprocate as she is only seventeen-years-old.

Over the following year however, the two do in fact marry one another. James and Heather travel to the Parliament building in Ottawa and consult with an official named Frank Hulme. James tells him everything that he had done at the Am-Cam Corporation and further reveals that he legally owns the helmet that powers the cyber-suit. Hulme consults with the Prime Minister, and they realize that Hudson is just the sort of man they need in the Ministry of Defense. Hulme arranges to retroactively place Hudson on the government payroll, and makes restitution with Am-Cam.

Parliament creates a research and development program under the umbrella of the Ministry of Defense called Department H, and they select Hudson to act as the department's administrator. During this time he meets the Canadian secret agent known as Wolverine.

One day, Hudson reads a newspaper article about a new American super-hero team known as the Fantastic Four. Inspired by the article, he decides to create his own Canadian defensive response team called Alpha Flight.

Retrieved from "https://heykidscomics.fandom.com/wiki/Alpha_Flight_Vol_1_3?oldid=1639860"
Community content is available under CC-BY-SA unless otherwise noted.