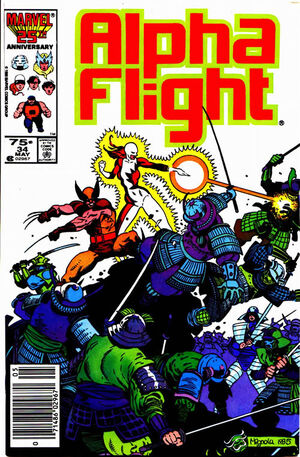 Puck leaves Tamarind Island and Alpha Flight to search for Heather Hudson, when moments later, the ill Snowbird arrives at the door, Box greets her lover Doug Thompson, who asks for Shaman. However, Shaman is currently on a spiritual quest, seeking power, and unavailable to aid the goddess.

In Westchester County, Wolverine and Heather come face to face with Lady Deathstrike, who gives the old friends her life story, revealing that Wolverine’s bones, laced with adamantium, are the property of her now-deceased father, the man who invented adamantium. More secrets of Wolverine’s past are revealed when Heather remembers seeing long ago on her deceased husband, Mac’s desk a file on bonding adamantium to bone, which he did not want her to see. She then begins to wonder if everything her husband told her and stood for was a lie, and suspects that he is responsible for turning Wolverine into the man he is. Wolverine and Heather run from Lady Deathstrike and her samurai before splitting up and fighting them one by one. Logan is soon left alone with Lady Deathstrike and while Heather battles many samurai, she also decides on a codename for herself, Vindicator. Puck arrives in Westchester County and with the Omnijet homed in on an electromagnetic pulse he thinks it is Heather fighting someone, however it is Lady Deathstrike and her sword, but Judd sees this too late and he crashes into Wolverine. Lady Deathstrike is about to kill Logan when Vindicator comes to his rescue and subsequently shatters Lady Deathstrike’s sword, and Vindicator proves that she does not need any protection.

Meanwhile, an exhausted Marrina is finally captured by her pursuer – Attuma!

From Marvel Database, a Wikia wiki.
Retrieved from "https://heykidscomics.fandom.com/wiki/Alpha_Flight_Vol_1_34?oldid=1549202"
Community content is available under CC-BY-SA unless otherwise noted.