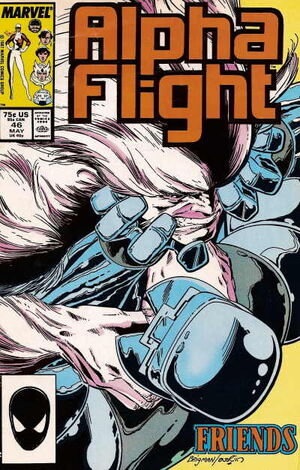 Aurora tries to have Dr. Lionel Jeffries change her boyfriend Walter Langkowski back into a man since he was turned into a woman and has even taken on the name "Wanda". The team explains what has happened to Walter Langkowski to bring him to this point and how he became Wanda Langkowski with Snowbird's body. Dr. Jeffries tries to transmutate her human flesh but does not succeed. His intern, Dr. Knapp says this is due to Wanda being an amalgam of the human and the goddess form. This explains why Dr. Jeffries power did not work because she was not 100% human. Aurora is upset that the being will never truly be "Walter" again and runs out of the clinic crying. Box takes off after her. The team goes back to the base and along the way Box finally catches up to the flying Aurora and Box says that he loves her and that unlike Wanda he CAN love her. She calls him a pig and flies off.

At Tamarind Island, Heather Hudson goes over the teams past and remembers all the major events leading to this point. She watches the monitors and sees Northstar, still coughing, talking to Wanda about how he is "doomed" and then walks off. Aurora talks to him in French and asks whats the matter and he storms off. She then yells at Purple Girl for eavesdropping. Purple Girl goes to Madison Jeffries to help with homework. Aurora begins to go to Box's room but instead turns around and goes to her own.

Inside Box's room, Roger Bochs begins to go crazy while he stays up all night talking to himself about how he loves Aurora and she will pay for making a fool of him. He says they all willl pay and he continues to scratch at his skin that is flaking away onto his bed.

Meanwhile, Aurora begins to dream of the nuns at the School for Girls she used to attend after her parents died. She is also haunted by herself as Jeanne-Marie. Suddenly, Box breaks into the room and grabs Aurora. The team runs into the room and blocks the stairs. Purple Girl tries to get close enough to use her powers and Box kicks her down the stairs. Wanda, in Sasquatch form attacks Box from behind and Puck grabs Aurora. Box electrocutes Sasquatch. The rest of the team tries to block Box from leaving. Madison Jeffries then uses his power to transmutate metal and "steals" the Box robot from Roger Bochs and kicks him out of the robot. Bochs kneels defeated and irrational. Madison Jeffries walks off in the Box suit and says Bochs has a twisted mind now.

Retrieved from "https://heykidscomics.fandom.com/wiki/Alpha_Flight_Vol_1_46?oldid=1385177"
Community content is available under CC-BY-SA unless otherwise noted.