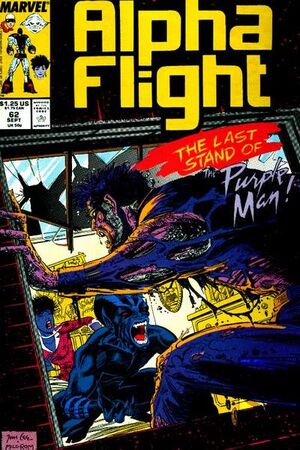 Appearing in "A Real Gone Daddy!"Edit

Synopsis for "A Real Gone Daddy!"Edit

Flashbacks of Purple Girl (Kara Killgrave) reveal that Alpha Flight is no more. Sasquatch lost all his fortune as no one believed him to be the real thing, as he was stuck in a girl's body. With nothing to rely on, Vindicator broke it off. Manikin (Whitman Knapp) broke up with Purple Girl to go study medicine, and the other members of Beta Flight stay at her house now. Meanwhile, in a graveyard far away, the Purple Man awakes with many zombies coming for Kara's life. Soon, he attacks their house, and they are forced to fight back. He hypnotizes Laura and Melanie into doing nothing, while Goblyn fights to much zombies. Purple Girl gets mad, and apparently kills her father. Meanwhile, Talisman apparently still has her powers, and is shocked.

Retrieved from "https://heykidscomics.fandom.com/wiki/Alpha_Flight_Vol_1_62?oldid=1388353"
Community content is available under CC-BY-SA unless otherwise noted.