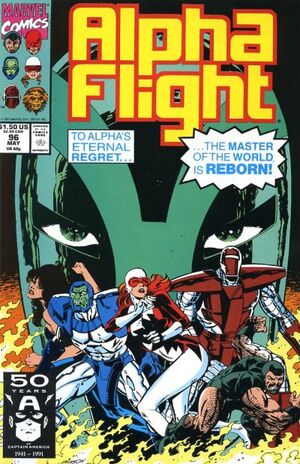 -- Master of the World

Appearing in "Slave to the World"Edit

Synopsis for "Slave to the World"Edit

The Master of the World stands aboard his Plodex spacecraft, dictating a diary entry with his pet falcon, Vesuvius, for company. On his monitoring systems, he sees that the Alreyda has run aground in the Queed Maud Gulf and is slowly spilling over five hundred millions of crude oil into the water. Alpha Flight arrive to help with the relief effort. He decides to amuse himself by clothing a human specimen in the clothes of an Alreyda crewman and teleporting it into the lower corridors of the tanker.

As Lil, Puck and Madison leave his aircraft aboard the Alreyda, Lil tells Madison to stop his anxiety about the results of Lil's mammogram. Guardian and Windshear fly aboard, Windshear forcing back the oil slick so the crew can keep it contained in booms. Box refashions his aircraft into armor upon which he sees the sporadic life signs of the Master's specimen: the team move in to rescue him.

The Master recollects his origins before considering that it is time for him to take control of the world. He takes a serum based on Scramble, which he has already tested on Puck and the Remnant Men, to reform himself once again into a more physically powerful state.

Aboard the Alreyda, Alpha Flight save the Master's teleported specimen and Heather clears the oily water before the exploding generators can create an inferno. Windshear saves her from a flash fire, before flying her topside, the team having kept the fires to the inner holds and contained the spill. The Master of the World, meanwhile, dresses in his costume, now containing flight and offensive capabilities, snapping Vesuvius' neck to exert his new-found physical power.

Retrieved from "https://heykidscomics.fandom.com/wiki/Alpha_Flight_Vol_1_96?oldid=1384352"
Community content is available under CC-BY-SA unless otherwise noted.