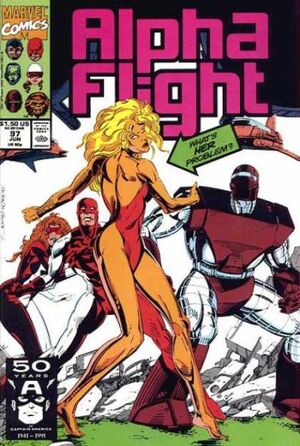 Appearing in "The Final Option (Part 1): Decisions of Faith"Edit

Synopsis for "The Final Option (Part 1): Decisions of Faith"Edit

General Clarke and Kerry Patrick tour Heather and James around the near-complete Alpha Flight Headquarters. Meanwhile, in deep space, J'Ridia is drained in her flight from the Consortium and head to her homeworld of Earth with the Consortium in pursuit. She intends to locate Ben Grimm in New York, her only Earth acquaintance, but crashes in Eaton Center, Toronto.

In Alpha Flight Headquarters, Madison, Shaman and Whitman Knapp consider a way to penetrate Diamond Lil's skin for a biopsy to no avail. Kara interrupts to inform them of Laura Dean waking from her coma, though she is not yet cognizant of her surroundings. On the planet Quwrll, intergalactic monitors see and report the arrival of Nova, herald of Galactus.

Guardian, Vindicator, Box and Northstar are alerted to J'Ridia and fly to ask her what happened. She explains that she disrupted the financial interests of the Consortium by returning a small planet to agrarianism. The Consortium demand J'Ridia and attack when Guardian asks for a discussion. Alpha Flight destroys several alien ships, but Toronto is suffering heavy damage and casualties. The Consortium then uncloak their mothership, demanding that Alpha Flight surrender J'Ridia or face immediate obliteration.

Retrieved from "https://heykidscomics.fandom.com/wiki/Alpha_Flight_Vol_1_97?oldid=1384353"
Community content is available under CC-BY-SA unless otherwise noted.