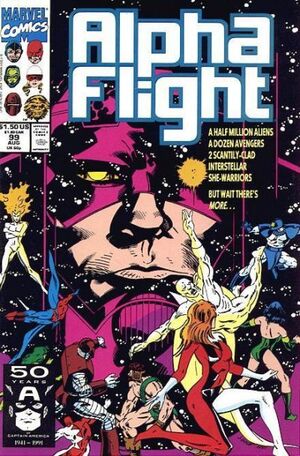 Appearing in "The Final Option (Part 3): Decisions of Loyalty"Edit

Synopsis for "The Final Option (Part 3): Decisions of Loyalty"Edit

Nova finds herself over the planet Quwrll; the Qwrlln inform her that for millennia their planet has been devoted to escaping the coming of Galactus, to which end they have teleported their planet and Nova into another dimension. Unfortunately for the Quwrlln, Galactus can home in on his herald's location and thus appears on the planet regardless.

In Toronto, Alpha Flight, the Avengers and Her (J'Ridia Starduster) continue to repel the ships and troops of the Consortium whilst trying to help civilians to safety, though Quasar finds it difficult to reconcile his role as Protector of the Universe with full-scale war. Guardian explains the origins of the attack to Captain America. Diamond Lil finds the alien who fired the laser that pierced her skin – she is forced to kill him to take it for use in her biopsy as it is attached biocybernetically to him.

On Quwrll, Galactus' planet-devouring equipment is not yet finished, so the Qwrlln choose to activate a last resort and contact Vindicator to bring superhumans to combat Galactus, which was the original purpose of resurrecting him. On Earth, Guardian calls the heroes for a momentary regroup in which Her offers to leave, but is convinced to tell her story instead. She tells of her discovery of the ravaged planet of U'sr'pria, where she ended the tyranny of U'Sr'Pr and helped the U'sr'prians restore the planet until the Consortium arrived, who had extensive business with the planet until its return to an agricultural state. She attempted to repel them, but was forced to flee to draw them away from U'sr'pria.

The Avengers and Alpha Flight agree to protect Her at any cost. The Chief Executive Officer of the Consortium appears to negotiate, threatening that if Her is not turned over to them or sent off Earth to be pursued further, the Consortium will conquer Earth, giving ten seconds for a decision. Her agrees to surrender, when Vindicator receives the signal from Quwrll; his mechanical components take over and he teleports himself, Guardian, Box, Windshear, Quasar, Hercules, Sersi, Vision and Her to the planet Quwrll, where they are informed they are needed to save billions of Qwrlln by defeating Galactus, while the remainder are left with the now hostile Consortium.

Retrieved from "https://heykidscomics.fandom.com/wiki/Alpha_Flight_Vol_1_99?oldid=1384355"
Community content is available under CC-BY-SA unless otherwise noted.