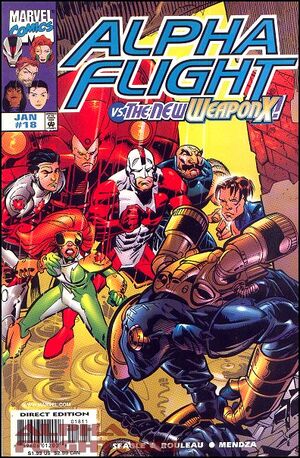 When a newly created Weapon X escapes from the sub-basement labs known only as “the Dungeon,” Alpha Flight is sent by Gentry to retrieve him. Documents anonymously sent to Puck reveal that Dr. Huxley has engineered a virus that confers powers to its victims, but which is fatal to everyone – except one man, the new Weapon X. Meanwhile, Radius has set out to test the limits of his abilities by entering a dangerous training level in Centrale only to be rescued by Flex, who just discovered big news about whom his real father is. In the ensuing battle with Weapon X, Alpha Flight, too, needs rescuing, by a new (or rather, old) team of the original members of Alpha Flight.

Retrieved from "https://heykidscomics.fandom.com/wiki/Alpha_Flight_Vol_2_18?oldid=1407973"
Community content is available under CC-BY-SA unless otherwise noted.