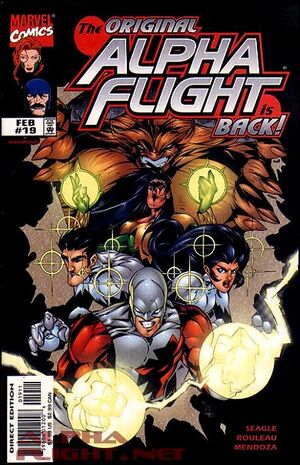 Alpha Flight battles Alpha Flight, new versus old, until Heather stops the fight to point out that Weapon X has escaped and asks the old team to unite to find him. They refuse to help, claiming that they can’t trust the new team given the nature of the new Dept H, and depart. Weapon X escapes into the sewers, while the new team finds Dr. Huxley spying on the battle. He reveals a much distorted history of the Weapon X project, and they head to the Hell Pounder Atomic Incinerator where they find Snowbird.

Retrieved from "https://heykidscomics.fandom.com/wiki/Alpha_Flight_Vol_2_19?oldid=1407974"
Community content is available under CC-BY-SA unless otherwise noted.