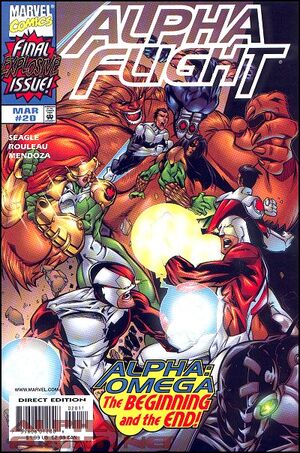 Weapon X forces Huxley to trigger the Atomic Incinerator apparently to release the bacteria and spread it across the world. The original Alphas believe the new team is there to recapture an infected Aurora. The battle is joined until the two Guardians lead their teams to remember that they’re there to protect Canada. Weapon X escapes into the Incinerator and reveals that he’s actually there to commit suicide thereby killing the bacteria. The Alphas rescue him, but in the end it’s futile. The two teams are joined into one, and both Guardians are allowed to continue serving.

In the letters, it's noted that Marvel released action figures of Alpha Flight just in time for the cancellation of the series.

Retrieved from "https://heykidscomics.fandom.com/wiki/Alpha_Flight_Vol_2_20?oldid=1407975"
Community content is available under CC-BY-SA unless otherwise noted.