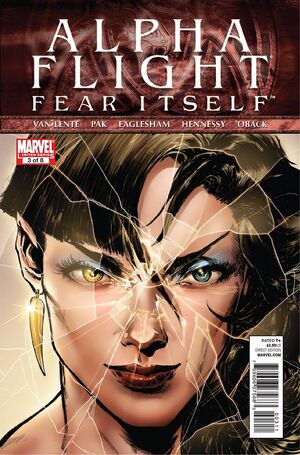 FEAR ITSELF TIE-IN! HEROES ON THE LAM! Having escaped imprisonment at the hands of the corrupt Unity Party, Alpha Flight find themselves hunted by the government they’d sworn to protect. Outmanned and outgunned, the Flight decide to go guerilla, but what will they do once the government raises the stakes by revealing their leverage against the team, including Northstar’s boyfriend and the child of Guardian and Vindicator held hostage?! Marvel Greg Pak and Fred Van Lente, along with legendary artist Dale Eaglesham, continue their revival of fan favorite Alpha Flight in this pulse-pounding issue!

Retrieved from "https://heykidscomics.fandom.com/wiki/Alpha_Flight_Vol_4_3?oldid=1649543"
Community content is available under CC-BY-SA unless otherwise noted.