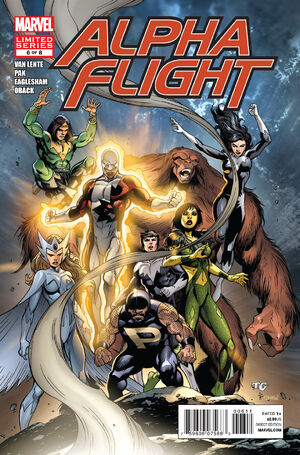 Appearing in "A Murder of Crows"Edit

FIGHT FOR FLIGHT! Alpha Flight continues to fight for the integrity of the country they love, but one of their own is being torn apart! The split personality of Aurora and Jean Marie grows increasingly unstable and threatens to destroy the hero, and the rest of Alpha Flight! Only Jean-Marie’s brother, Northstar, can save her... but will Jean-Paul be able to do what needs to be done to save his sister and all those he hold dear? Greg Pak and Fred Van Lente’s lauded revival of one of Marvel’s most beloved teams continues with art by the incomparable Dale Eaglesham!

Retrieved from "https://heykidscomics.fandom.com/wiki/Alpha_Flight_Vol_4_6?oldid=1407994"
Community content is available under CC-BY-SA unless otherwise noted.