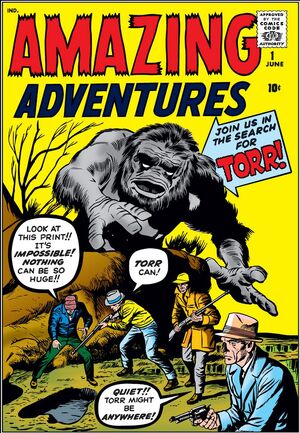 A small unimportant planet...inhabited by an inferior race! Yet the oxygen atmosphere is suitable for Torr! This planet will make a good satellite for my world!

Two astronomers watch with apprehension the approach of a space ship. When it lands, a ruthless alien warrior named Torr threatens them with the subjection of Earth. Torr mentally switches bodies with one of them in order to observe Earth culture and places a device on the wrist of the other that he says will act as a beacon to his home planet should the astronomer attempt to speak of Torr's plans. The man grabs a policeman's revolver and shoots Torr's occupied human body dead. This leads to his arrest and trial, whereupon the jury is about to give its verdict, when the man they all thought the victim of the shooting enters the courtroom and informs them of the previous events. When the astronomer shot the body Torr was occupying it forced Torr's personality to return to his true body, where Torr seemingly died and the beacon device crumbled, freeing the Earth from deadly threat.

A too-serious boy named Tommy is taught that it's okay to have fun with make-belief by the girl of his dreams, Kitty Blake, who invites him to a costume party. He arrives at the wrong address without a costume and meets Old King Cole and other fairy tale characters who he thinks are just Kitty's friends acting the part. They call him a "Doubting Thomas" since he doesn't believe in fairy tales. When he leaves the party to phone Kitty to find out when she left (since he hadn't seen her yet), he found out he was at the wrong address. He arrives at the right address and everyone loves his "costume" which he notices is just his plain clothes but silver letters spelling "Doubting Thomas" had appeared.

Appearing in "Midnight in the Wax Museum"Edit

Synopsis for "Midnight in the Wax Museum"Edit

A thief thinks that he can hide from the police in a wax museum until the wax figures leave their displays and chase him into the waiting arms of the law.

Appearing in "I Am the Fantastic Dr. Droom!"Edit

Synopsis for "I Am the Fantastic Dr. Droom!"Edit

A doctor from the United States answers the call from a Tibetan lama but when he arrives is told there will be no payment. He must cross burning coals and face the dangerous half-gorilla, half-lion Gorlion. He passes the lama's tests, but finds the lama is not suffering from disease, merely dying of natural old age. The lama alters the man's appearance to that of an Asiatic mystic and transfers mystical powers to him so that he may battle the occult forces of evil as Dr. Droom.

Retrieved from "https://heykidscomics.fandom.com/wiki/Amazing_Adventures_Vol_1_1?oldid=1681544"
Community content is available under CC-BY-SA unless otherwise noted.