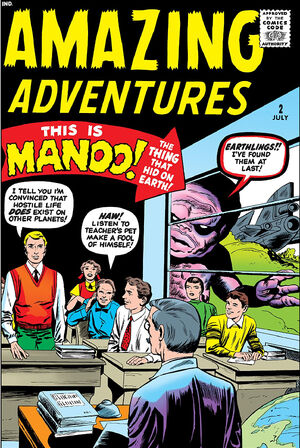 But his sinister plan failed, and now the tables have turned! Now Manoo shall enlist your aid in capturing one of the most dangerous criminals in the known galaxy!!

Appearing in "I Led the Strange Search for Manoo!"Edit

Synopsis for "I Led the Strange Search for Manoo!"Edit

A high school student comes across a crashed alien ship and the creature lying nearby tells him that he is pursuing a criminal named Manoo who endangers all of Earth. He tells the lad he is too weak to carry on the hunt and gives him a ray gun to blast him with. Manoo is a shape-shifter but he can be discovered by noticing that he will not cast a shadow in his disguise. The boy finally checks a theater and discovers Manoo. He finds that he can't just gun the alien down in cold blood despite how dangerous he may be. When he explains everything to Manoo, Manoo tells him that he's been tricked, and the criminal he's been pursuing was the one at the crash site. The boy goes along with his plan to take Manoo back to the crash site supposedly under guard so he can stand trial on his home world. When he returns, the first alien is angry the boy did not shoot Manoo and he and Manoo begin to battle. The boy is undecided on who he should aid until the first alien grabs him and threatens his life if Manoo does not capitulate. The boy escapes his grasp by grabbing a low tree branch and Manoo defeats the criminal alien. Before departing Earth, Manoo rewards the boy with a huge gemstone, making the formally impoverished student very wealthy.

Appearing in "The World Below"Edit

Synopsis for "The World Below"Edit

Dr. Droom is called in to investigate the disappearance of an ocean liner and when his Bathysphere touches the ocean floor he discovers a lever. Pulling the lever opens the top of an undersea mountain within which he discovers Atlantis. The Atlanteans have kidnapped the liner by placing it within an air bubble and submerging it in order to study humans for a surface invasion. Dr. Droom defeats the leader's guards, takes over the broadcast station, and hypnotizes the entire populace into believing the surface world is barren. He also hypnotizes the liner's occupants into forgetting their capture, and releases the mechanism that returns the ship to the surface.

A garage attendant who pretends to be injured by motorists to extort money by way of avoiding a lawsuit is given his just desserts when he pulls his routine on a Martian criminal who has just escaped jail in a prison transport. When the attendant demands money for his fake injury the criminal tells him he has no money but offers to give him the car instead. As the criminal walks away, he cannot figure why the attendant would want the car as it is only programmed to return to the Martian jail.

Retrieved from "https://heykidscomics.fandom.com/wiki/Amazing_Adventures_Vol_1_2?oldid=1681543"
Community content is available under CC-BY-SA unless otherwise noted.