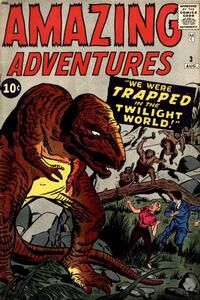 I was to use our superior scientific devices to perform tricks and become... famous then, after I became a political leader, I was to use my influence to pave the way for an invasion from Saturn!

Appearing in "We Were Trapped in the Twilight World!"Edit

Synopsis for "We Were Trapped in the Twilight World!"Edit

A young man has a theory that the past and future are merely different dimensions, and when he and his girlfriend pass through a mist, they find themselves in the distant past. They are pursued by neanderthals and left dangling from a cliff as sacrifices for a flying reptile when an arrow takes down the creature. They are hauled back up by their savior who tells them his name is Cro. He leads them back to the mist which they pass through and the young man surmises that Cro must have been one of the early Cro-Magnon peoples. They are greeted by the man's college professor who dismisses their story as an hallucination. They discover evidence to the contrary when they realize that Cro has tossed them a necklace of saber-tooth tiger teeth as a gift from his time to ours.

Synopsis for "The Teddy Bear"Edit

A woman who keeps a teddy bear from childhood marries a surveyor who brings them out west for a job. He notices tracks of a mountain lion nearby and leaves the tent after his wife has gone to sleep to hunt it down. The beast surprises him, and brushes by him on the way towards the tent. Panicked, he runs to the tent even though his rifle jammed, determined to fight the mountain lion with his bare hands if he needs to in order to save his wife. When he opens the tent flap, he finds the mountain lion dead on the floor and his wife still asleep with the teddy bear sitting in the corner covered with scratches. From that day forward he no longer chides his wife as being "silly" for being a grown woman who keeps a teddy bear.

Dr. Droom hypnotizes a disguised warrior from the planet Saturn into confessing to the police that he intended to use technology in his magic act as a means of gaining fame and becoming an elected official.

Retrieved from "https://heykidscomics.fandom.com/wiki/Amazing_Adventures_Vol_1_3?oldid=1681516"
Community content is available under CC-BY-SA unless otherwise noted.