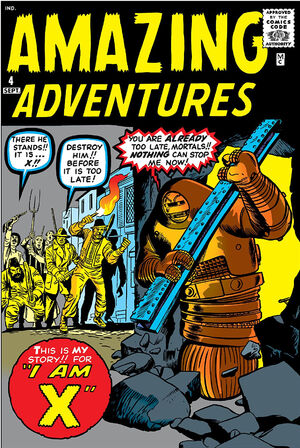 After what has happened, I myself will never create another Robot X! But one day, other scientists will learn how to build them, and perhaps by then, mankind will have matured enough so that we will not fear what we do not understand!

Appearing in "I Am Robot X"Edit

Synopsis for "I Am Robot X"Edit

A scientist builds a thinking robot and runs into opposition from the editor of a local paper. The robot becomes suspicious of the editor's propaganda against his kind and builds an army in a secret factory to overcome police resistance when he assaults the town to capture and expose the newspaper editor as a Martian in disguise. They had planted several aliens in positions of influence so as to soften Earth up for an eventual invasion but knew that they could not manipulate thinking robots and had to turn the humans against them. With the alien plot foiled, Robot X and his fellow robots deactivate themselves so that humans will not need to live in fear. The scientist who created Robot X vows to create no more robots, and he hopes one day humanity will be mature enough to accept their existence.

A writer, Henry Conrad, is trying to finish a book about his ancestor, Branders Conrad, who was a supposed witch that made a pact with the devil. Finding no documentation about it, an Uninvited Guest appears who reveals himself as the devil and shows the writer what really happened. Branders did indeed sell his soul for the gift of second sight (to see into the future). The next morning, Henry wakes up in a haze, realizes his book is finished and finds footprints of the Uninvited Guest!

Appearing in "Who or What was the Bootblack?"Edit

Synopsis for "Who or What was the Bootblack?"Edit

A greedy industrialist relates his cruel business dealings to a shoe shine man he treats with disdain. The bootblack realizes his customer is an evil man that must be punished. If the man doesn't sign a business contract within the next several minutes he will suffer financial loss. When he refuses to pay the bootblack because he did not finish shining his shoes in the allotted time, he finds to his astonishment that his shoes walk in the direction opposite the building he needs to sign the business deal. He glances at his watch and sees that it is too late to sign, and when he glances over his shoulder at the bootblack, he sees the man sporting the wings of an angel. "If the law down here cannot punish you, there is always a higher power that can."

Appearing in "What Lurks Within?"Edit

Synopsis for "What Lurks Within?"Edit

Dr. Droom defeats alien invaders by projecting his thoughts so as to seem as if he is actually a construction derrick. The aliens realize they can never defeat a planet filled with such powerful creatures and so they depart.

Retrieved from "https://heykidscomics.fandom.com/wiki/Amazing_Adventures_Vol_1_4?oldid=1526923"
Community content is available under CC-BY-SA unless otherwise noted.